Gene therapy: miracle in our midst 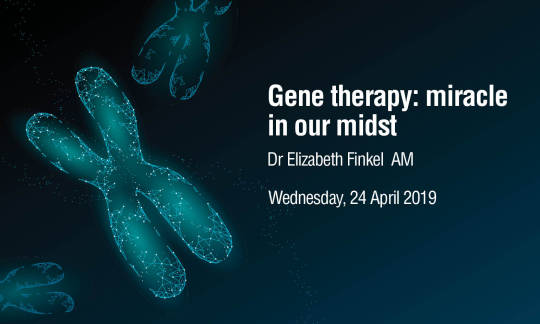 When the Convergence Science Network invited me to give a talk the brief was to address the issue of hype versus hope in the spruiking of medical advances. Audience members often expressed a sense of frustration with ‘breakthroughs‘ that have yet to materialise, I was told.

The Network’s request is a tall order.

I am certainly guilty of spruiking, though my reporting, feature articles and two books: one on the 1998 human embryonic stem cell revolution and another on the 2001 reading of the human genome with its promise of personalized medicine.

Both these breakthroughs are around twenty years old so it is a fair time to ask: what have they delivered? I was all prepared to make a level-headed attempt to answer the question. It would have gone along the following lines.

In the case of human embryonic stem cells, there’s not a great deal yet to have arrived in the clinic. The furthest treatment down the track is one for treating macular degeneration. We’re still waiting for treatments for other ailing tissues to prove their worth. I can’t help inserting this gorgeous cartoon from a story in last September’s issue of Cosmos magazine, “Calling the stem cell race.” https://cosmosmagazine.com/biology/the-stem-cell-race 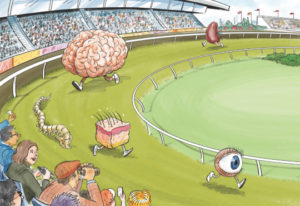 And while your GP may not yet be prescribing treatments based on your genome, there’s no doubt that it is the genome revolution we have to thank for better targeted cancer treatment, for the ability to diagnose congenital childhood illness, and crucially to carry out genetic screens on couples or embryos, to spare the tragedy of children being born with devastating genetic diseases.

So I was all set to deliver a sort of ‘cup half empty- half full’ talk when my plan was waylaid by a revolution I hadn’t even registered.

As editor in chief of a science magazine for six years, I’m not sure how I missed the gene therapy revolution. Yes, we did the odd news report on gene therapy, but mostly we were blinded by the deluge of CRISPR publications – a cheap, precise new technique of gene editing that was transforming the ability to genetically modify plants, insects, animals and maybe one day humans. As it turns out this happened in China last November .

But it wasn’t just me who missed the gene therapy revolution. It seems most people I speak to about it – including many medical people – hadn’t noticed.

This isn’t a cup half full story. The most dramatic example has biblical dimensions. In 2017, the New England Journal of Medicine published the results of a gene therapy trial for children born with Spinal Muscular Atrophy (SMA). These kids normally develop paralysis and die by the age of two. Instead most were sitting and rolling; some were walking and talking. Is this just a fringe thing? Big Pharma doesn’t think so. Novartis recently paid $US 8.7 billion to purchase – AveXis, the start-up company behind the SMA trial.

In this talk, allow me to guide you through the gene therapy revolution and how it is set to disrupt the way medicine is delivered.

Dr Elizabeth Finkel AM is a former biochemist who now tells the stories of others scientists. She co-founded Cosmos Magazine, serving as Editor in Chief from June 2013 to September 2018 and is now Editor at Large.

She has published two books: “Stem Cells: Controversy at the Frontiers of Science” in 2005, which won the Queensland premier’s Literary award and “The Genome Generation” in 2012. Her work is regularly anthologised in Best Australian Science Writing.

In 20I5 she won the Eureka Award for Science Journalism from the Department of Industry and Science. In March 2019 she was announced as the Australian Society of Medical Research Medallist.