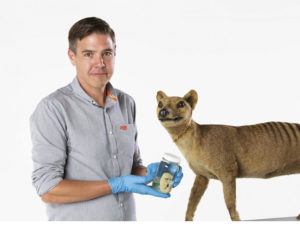 Sequencing the genome. The genome contains the complete set of instructions on how to build an organism. They are very large, ours is about 3 billion bases (letters) long! When I started in science, figuring out a few hundred bases of the genome was an impressive amount. Now I can sequence a whole genome in a matter of hours! This changed the landscape of genetics – suddenly we can look at every single bit of an organism’s DNA and start to ask questions we had only ever dreamed of answering.

De-extinction of the Tasmanian tiger (thylacine): The Tassie tiger went extinct in 1936 after being aggressively exterminated by European settlers in Tasmania. This was a tragic loss of a truly unique and fascinating marsupial. It was completely unlike any other (living) marsupial, looking almost identical to a wolf, but still having a pouch and carrying joeys like all marsupials. It was also an apex predator, sitting right at the top of the food chain. This made it very unique because it was the only marsupial apex predator to live in modern times. Apex predators are common in groups of mammals like wolves, bears, tiger, lions, killer whales etc. But not in Marsupial mammals. I would love to be able to bring this animal back!

Large-scale genome editing: The current way to de-extinct an animal is to sequence its genome (we have done this already for the thylacine) and then take the DNA from a closely related living animal and edit in the differences between that genome and the extinct animal’s genome – then viola! – you have a functioning genome for your extinct animal. How closely related your extinct animal is to a living one, will make a big difference in the amount of differences in their DNA. For example, the mammoth was very closely related to Asian elephants, and so they are a good place to start for de-extinction of that species. Many labs are working on efficient and accurate ways to make the changes to the DNA. They will need to make many thousands of changes. Currently we can do this but it is very slow and very expensive, but labs are working on new methods to make it faster and cheaper. We have limits on what we can sequence. DNA from dinosaurs for example is completely degraded – so Jurassic park is not going to happen! Also, there are parts of the genome from extinct species that we can’t sequence – that are full of repeat sequences, the same sequence repeated over and over, we cannot know how many copies of the repeats exist in these locations. Right now we still don’t really know how important these regions are and if we build an animal without then (or with changes in these regions) if the animal will still be the same.

Both the things I mentioned above have changed the face of science and medicine. Sequencing whole genomes is now routine for patients with developmental diseases. We can also use this information to determine what medicines might work best for certain diseases in different people. The development of efficient ways to edit the genome has huge implications for potentially engineering in resistance to disease, fixing developmental diseases and altering development. Obviously, the limits are endless for this technology for all plants and animals including us!