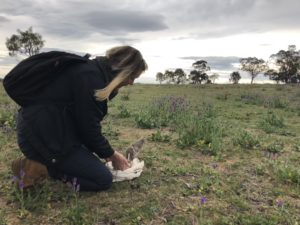 Over the last decade, there have been some amazing advances in animal monitoring technology that allow us to cover areas that would have been impossible in the past, because these places are too large, remote or densely vegetated – for example, surveying remote populations of animals from the air using drones, and locating threatened species using detection dogs.

Many would say it’s impossible to bring critically endangered species back from the brink of extinction – especially when numbers are very low.  I’m working towards making this possible, because every species is precious.  Species existing today have evolved over many thousands of years, and we cannot sit by and allow them to disappear from the planet in what is the equivalent to the blink of an eye, due to human-induced threats.

There is much work going towards making GPS tracking technology smaller and lighter, with batteries that last longer or with units that are solar-powered.  Those of us who work with threatened species like the Orange-bellied parrot or Plains-wanderer dream of being able to follow the movements of these animals, to understand where they go and how they use the landscape.  These are really important gaps in our knowledge for some threatened species.   When you want to release animals into the wild that have been born in captivity, it’s often heart-wrenching to know that you may not be able to find them again, despite best efforts with follow-up monitoring.  It would be wonderful to be able to better track their progress to make sure they’re doing well out there. It’s clear that for many Australian species and ecosystems more generally, it will remain impossible to bring numbers and conditions back to the state they were in before Europeans came here.   We don’t have a shared vision of what this continent was like only 250 years ago, but I think if we did, we’d have a better chance of restoring the natural balance.  Bruce Pascoe’s book ‘Dark Emu’ is a really important book to me because it changed my thinking and helped me start to shape a picture in my mind of the paradise that Australia once was under the stewardship of the Indigenous people.  It seems impossible, but there are examples of places that are now arid and unproductive that were once fertile, green and teeming with life.

I think the voices that have been dominant for the last couple of hundred years or so are now becoming quieter to make room for other voices – this would’ve seemed impossible not that long ago.  The idea that we should strive for dominion over nature, to bend it to our will, is shifting.  A lot of us now want to engage more closely with nature.  We want to hear from the First Nation peoples and want to learn from their perspective around connection to country.  The idea of science being the exclusive realm of one elite group is also being challenged.  I still believe in experts, and there’s information that’s incontrovertibly true because it’s been gathered through robust, methodical investigation, then shared, reviewed and verified, but the experts don’t just come in one form anymore.  There’s more acknowledgement of the roles that can be played by indigenous science and citizen science for example.

In terms of human and planetary flourishing, there’s absolutely only one way forward from my perspective – we have to value the natural world and express that through effort and investment.  I hope it’s not impossible for humans to make that shift around our perception of what’s important and truly valuable.