Cells are covered by sensors to communicate with their surroundings. These sensors were thought to locate in the surface of cells and act like messengers, receiving information from outside and then passing this information to the cell. With the development of new tools, we found that these sensors not only are on the cell surface, they are in fact inside as well, but where inside? Well…  they are everywhere! The more we look, the more locations we find and we are starting to understand that sensors from different locations communicate specific messages. Some locations communicate essential messages for our survival but others just contain messages carrying diseases.

I study sensors that carry pain information, but not the type of pain information that warns you to stop doing something because you are going to get hurt, like putting your hand to close to bonfire on a cold day, I study pain sensors that are not working properly and are making people suffer unnecessarily. What we know so far is that, tiny vesicles (a membranous and usually fluid-filled pouch) inside the cell called endosomes, have messengers that only receive pain messages and what I am working on is on trying to intercept that message and alter it so people stop suffering from terrible and unnecessary pain. I do this by designing tiny pills that, once inside your body, know exactly that they have to go to endosomes and deliver a drug there with the mission to cancel pain messages.

There are many scientists in the world right now that are trying to create a pill that can effectively stop pain. Many people will say… but wait, we already have painkillers and it is true. The problem is that current painkillers are only effective for specific types of pain and there is a lot of people suffering from terrible diseases such as cancer, diabetes, arthritis, whose pain cannot be treated with regular painkillers and they just have to live with their pain every day. The impossible now is to stop the, so far, unstoppable and untreatable pain. 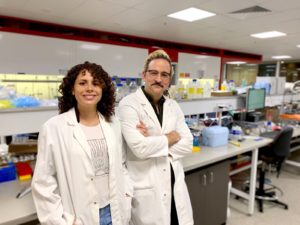 Pain is not only an annoying sensation that requires a painkiller to go away, it is actually a very important mechanism that help keeping us alive and warn us of any potential danger or threat. Without the pain sensation, people could really hurt themselves by really simple things like, drinking a hot beverage that will hurt your throat as the steaming liquid passes. As a scientist working in pain, the idea is to stop unnecessary pain that is mainly associated with a disease, like bone cancer for example. The problem is that sometimes it is nearly impossible to distinguish between protective pain and unnecessary pain, which means that it will be impossible to stop all the unnecessary pain without affecting protective pain.

There is not a single thing that I could name has the largest contribution to the field. It is actually a summation of things, each one contributing with a piece to this big pain puzzle. In 1664, Descartes proposed that pain was like a thread that connects your brain to a part of your body, such as your hand and anytime you feel pain, that thread will move and ring a bell in your brain to let you know that you are being exposed to harm, making you fell pain.

Since then, we know that this thread is comprised by neurons that are dedicated to transmit pain, later we found out that not only neurons transmit pain, but also cells surrounding neurons. We can also observe the communication between neurons and we learned to recognise when they are communicating pain.

At the moment, we have progressed so much that we can go further and see where these messages originate within a neuron and now scientist like me are trying to develop smart drugs that can only travel to that part in the neuron and block those pain messages. We are everyday advancing with tiny steps, but when we add the tiny steps of each scientist, the advances achieved are huge.

Dr Ramírez García is a researcher in the ARC Centre of Excellence in Convergent Bio-Nano Science & Technology headquartered at Monash University, Parkville.