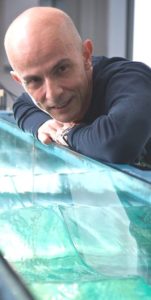 Science-fiction writer Arthur C. Clarke said, more or less, “If an old scientist says something is possible, that is very likely true. If the old scientist says something is impossible, that is very likely false.” (This is sometimes called Clarke’s First Law.) Since I read science fiction from when I was young, I never thought anything was impossible!

However, we did think some things would be a long way off …

My field is the study of waves and vibrations in fluids. My field is part of fluid dynamics, which is the main part of fluid mechanics, a subject studied by mechanical, biomedical and civil engineers, oceanographers, metrorologists, geophysicists and astrophysicists. To learn more, start with pictures and movies from the Australasian Fluid Mechanics Society and the American Physical Society. I started working on space-industry problems and worked on oceanographic and meteorological problems and then for the mining, defence, food, water, and renewable-energy industries.

I never imagined that I would get to work on tiny bubbles injected into the blood, hoping we could use them to diagnose disease. When I started working on that topic, I would have thought it impossible that bubbles could not only diagnose diseases, but also get life-saving drugs into the brain. But at the same time we were working on diagnosis, others demonstrated that bubbles could actually be used to treat brain diseases. We still do not really understand how this works.

Show me a photo of the bubbles that appeared underwater at the instant you poured a glass of water, and I hope to tell you the sound you made when you poured it. This is currently impossible. But if we could do this, we might be able to use simple instruments to measure the rate at which oceans absorb carbon dioxide, which has a big effect on the rate the world is heating up. We could also control many industries to be much more efficient, including the manufacturing of minerals, food and medical products.

Predicting the weather on planets we have not discovered yet! More down-to-Earth, but still very difficult, is preventing storm waves from causing erosion and flooding as sea levels rise, without building walls that damage the marine environment.

Fluid-dynamics experts are also working on predicting the twists and turns of a bushfire, which involves an incredibly complex interplay of heat and fluid flows as well as combustion chemistry. Other colleagues are trying to understand how air flows in the lungs of premature babies. Others are trying to predict how far viruses travel in airborne droplets.

Some fluid dynamicists are trying to design aircraft that could travel safely around the world in just a few hours, while others are trying to understand how waves and currents bring life to coral reefs. Toughest of all is the complete understanding of turbulence, the chaotic swirling of eddies that is all around us but still impossible to predict.

Replacing laboratory experiments on fluid flows with perfect computer simulations. Of course, if Clarke’s First Law is right and if I am an old scientist, even this will be possible. We have been moving in that direction, of course. Thirty-two years ago, I did a laboratory experiment on waves in a rotating fluid that showed some really interesting and complex behaviour. On seeing this, someone confidently told me that in six months he would have simulated the experiment using a computer. He did not succeed. A colleague very capable in computer simulations started working on it fifteen years ago. More top experts joined this effort in 2013 and we finally succeeded in 2016, a whole 28 years after that original over-confident prediction. So I still do not want to say something is impossible; we might just have to wait longer than we think. Or maybe, with something like a quantum computer, it is just around the corner.

We can now use computers so powerful they can solve our equations of fluid dynamics, together with many other equations studied by other scientists, that together predict how the Earth’s climate will change many years into the future. Although these predictions have to include a lot of uncertainties – particularly how the oceans absorb carbon dioxide, and how we deal with turbulence –  now that we have this ability to see into the future, we know what we have to do to take control of our planet’s future.