Surrounded by an exhibition of Michael Silver’s science-themed photography at Magnet Galleries, Dr Caples officially launched National Science Week in Victoria on Friday, 10th of August. In April, Science Week Victoria Lead, Dr Renee Beale, imagined Victorians experiencing science in their everyday life, and now with over 430 events across Victoria, including exhibits, performances, public lectures, and science-themed arts and crafts, “you could hardly miss Science Week – not that you would”. 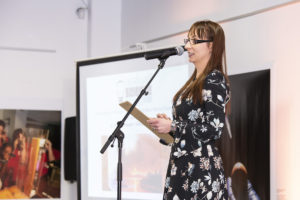 This year’s theme is Game Changers and Change Makers and to celebrate both the beginning of Science Week and the 200th anniversary of Frankenstein, geologist Dr James Driscoll, School of Earth, Atmosphere, and Environment, Monash University, explored the origins of the gothic tale and Mary Shelley’s story – a change maker in the world of science fiction.

Dr Driscoll set the scene of 1815, three years before the creation of Frankenstein and his monster: Napolean was defeated in the Battle of Waterloo in June, ending over a decade of conflict that came with the Napoleanic Wars, William Smith drew the first modern map of Great Britain, the first natural gas was discovered, and the Apothecaries Act 1815 was established, which was the beginning of regulation of the medical profession in the UK…but not all was well in 1815. You may wonder why a geologist, of all people, was chosen to present the story of Mary Shelley, and the answer lies over 11,700 kilometres away from her home in England, at the Mount Tambora volcano, east of Java, Indonesia. 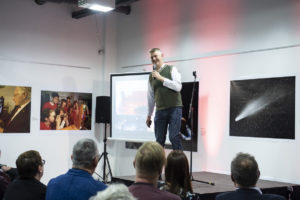 Dr James Driscoll described the devastation of volcano eruptions – in particular, that of Mount Tambora in 1815.

Like any other volcano, Mount Tambora was formed by plate tectonics. In a mosaic-like pattern, the Earth’s crust is divided into sections of rock called tectonic plates, which resemble puzzle pieces that constantly move against each other. The friction created between two plates as they move against each other causes the rock underneath to melt and turn into magma. The molten hot magma under the surface of the Earth creates great pressure, and comes out as lava through volcanoes – geological ruptures in the Earth’s crust. Mount Tambora is a stratovolcano: formed from explosive eruptions with andesitic (highly viscous) lava with a high concentration of silica.

Volcanic eruptions are measured using the volcano explosivity index (VEI), which ranges from zero (non-explosive) to eight (catastrophically explosive) by combining the amount of material ejected with the height of the eruption column and eruption duration. In the past 10,000 years, there have been approximately eight VEI 7 eruptions, of which Mount Tambora in 1815 is the most recent[i] (around 1000 times greater than the eruption at Mount St. Helens).

Mount Tambora’s catastrophic eruption began on the 5th of April, 1815, with small tremors and pyroclastic flows (600-700°C gas and volcanic matter travelling 100-700 km/h). Five days later, a shattering blast blew the mountain apart, and the pyroclastic flows and tsunamis that followed killed over 210,000 people. The effects were not contained to the devastated Sumbawa and surrounding region, however, and influenced weather around the world. The explosion released 60 megatonnes of sulfuric acid, ash, and other rock and aerosols into the atmosphere, which blocked sunlight from reaching Earth’s surface. Temperatures around the world fell below zero, and what followed were famine, floods, and social unrest due to the ensuing crop failure and animal death. The world sank into a three-year winter before the temperature began to rise again.

The three-year winter caused by Mount Tambora set the mood of Mary Shelley (Mary Wollstonecraft Godwin at the time) in 1816, when she first invented the idea of Frankenstein’s monster. At the time, she was spending summer at Lake Geneva, Switzerland, with her partner Percy Shelley, stepsister Claire Claremont, and Lord Byron. “It proved a wet, ungenial summer, and incessant rain often confined [them] for days to the house” (Mary Shelley, 1831). To pass the time, the party wrote ghost stories, and Mary busied herself to think of a story that rivalled those told by the others, but to no avail. One night, she dreamt of a scientist who created life and was horrified by what he had made. When she told the others her terrifying nightmare, she fashioned it into a story that soon evolved into a critically-acclaimed novel. The gloomy summer vaccation also produced an array of revered poems by Lord Byron, and a sinister short story called The Vampyre, written by John Polidori and inspired by Byron, which would years later influence Bram Stoker’s Dracula. 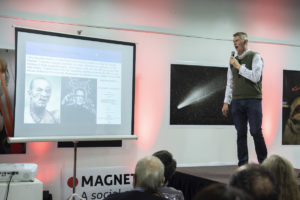 Frankenstein’s monster was created in the midst of a long, global winter.

And so it was that a catastrophic volcanic eruption in Indonesia created the cold and dreary conditions for the writing of Frankenstein; or, The Modern Prometheus by Mary Shelley on the other side of the world years later. As we celebrate the successes of science, technology, engineering and mathematics during National Science Week, we are reminded that visions that were once science-fiction are becoming realities. While perhaps we might not want to see the walking dead any time soon, we hope that Science Week inspires Game Changers and Change Makers who will produce the technologies, advances, and stories of the future. 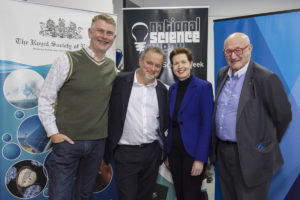