National Science Week is in its third decade of celebration and, according to Mike Flattley, CEO of RSV, it is only “becoming more vigorous”. Dr Amanda Caples, Victoria’s Lead Scientist, officially launched Science Week in Victoria at Melbourne Museum on Friday, 9th of August. To her, it’s a week to “help Victorians realise the opportunity for science” and to “engage with our next generation of scientists, who will be the ones to solve the challenges we face.” During the Science Week festivities, we raise the profile of STEM and strengthen our community at the same time. 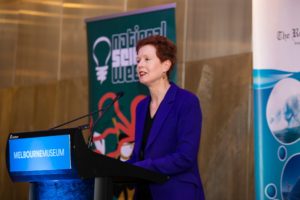 “Science cuts across boundaries – gender, culture, and others” – Dr Nuriah Veis, Director of Research at Museums Victoria. Science extends to the extremes of nature, to all people, to the ends of the Earth, and beyond. Nate Byrnes mediated an extraordinary panel of scientists who shared their work that spreads from the depths of the ocean to space. 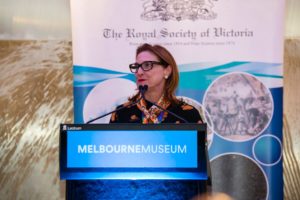 Dr Darlene Lim works with scientists, technicians, and engineers at NASA with the vision of sending humans on deep space voyages. The team simulates space missions here on Earth to test new technologies, robotic equipment and communication support, when the stakes of things going wrong isn’t as high. One of the greatest concerns for a space mission is the communication delay. While we can talk to anyone anywhere on Earth instantaneously, the distance between Earth and Mars creates a delay of up to 20 minutes between messages. If something on Mars goes wrong, people on Earth might not know about it for that long.

The NASA team explores volcanoes in Idaho and Hawai’i as astronauts and are guided by a mission control team with a 10-15-minute delay in any message that they send to each other. Darlene also works with constructed simulations for astronauts orbiting Mars to control robots on the planet’s surface. Astronauts on board a marine vessel control remote operated vehicles in the ocean at depths of up to 4000 m and communicate with a team on shore via a satellite. These simulations will prepare future astronauts to explore new terrains with science at the forefront. 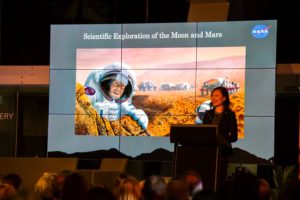 Where Dr Kate Selway works, there is nothing but ice for hundreds of kilometres in every direction. As a geophysicist, she wants to understand the melting of the ice sheets at the North and South Poles. Ice sheets are a huge weight on the Earth’s surface and the upper mantle can bulge out underneath from the force. As the ice melts, the Earth slowly rebounds as the pressure on top of it diminishes (like a mattress bouncing back after you’ve laid on it). Kate is measuring how quickly the Earth bounces back to determine how much ice is being lost. Kate also travels to east Africa, where the African continent is slowly being torn apart by the separation of tectonic plates underneath. She studies the deepest lakes in the world there, which are really “gashes in the Earth’s surface”. In the spirit of Science Week, she always involves African school students in the data collection processes to give them a taste of scientific discovery. 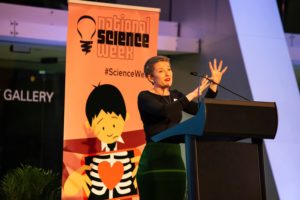 Down at the bottom of the ocean, where there is no light, live the creatures that Dr Dianne Bray studies. She studies specimens in museum collections – “the libraries of life in the past, present and hopefully future” that allow people who aren’t yet born to ask questions about biodiversity. Dianne studies what lives below the twilight zone. Fish have been detected as deep as 8400 m, but below that, the pressure becomes too great to sustain life. In the darkness, life is filled with bioluminescence and very little colour. As the longest light wavelength in the visible spectrum, “red is the new black” and is completely lost, except for in one fish that Dianne has discovered that still has some red colour. Australia has one of the largest Exclusive Economic Zones (EEZ), covering around 10 million square kilometres of marine area, but we don’t know much about it – Dianne wants to uncover what lies in our deep seas. 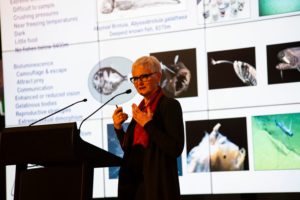 Exploration and discovery are at the heart of science. Every day, these scientists balance the excitement and danger of collecting data from some of the wildest and most hostile environments on the planet in the pursuit of knowledge. From the frozen tundra of Antarctica to the deserts of central Australia, from the lava flows of Hawai’i to the depths of the world’s deepest abyss off the Eastern coast of our continent, this dream team of science adventurers have had their fair share of remarkable journeys and discoveries. Hopefully they inspire others to get out and have scientific adventures of their own this National Science Week.