Everyone’s reality is slightly different. We all experience the world around us in different ways. Our world is sensed as electrical impulses that our brains then turn into something meaningful. At Extrasensory, everyone was challenged to make sense of the world of the senses and find the limits to their own.

There were many incredible sights to behold. Skunk Control (Victoria University) displayed their Fractured Alter light installation. A display of transparent flowers made of treated plastics may have seemed simple, but through a polarised filter, the white light shining on them was transformed into a burst of pearly colour. People also looked up at the stars with Dr Simon Cropper (Melbourne School of Psychology) to find patterns and stories in the sky. What you find can tell you something about your mind. There were also virtual reality (VR) experiences hosted by Swinburne University, CSIRO Data61 and the ARC Centre of Excellence in Convergent Bio-Nano Science and Technology. Participants took the virtual balance challenge, travelled through the digestive system,  and explored the inside of a cell as they immersed themselves in a virtual world.

In contrast, there were tactile displays and activities for the blind and low vision community, and for others to see through their eyes.. In what looked like an arts and crafts explosion, the Rossjohn Infection and Immunity Lab (Monash Biomedicine Discovery Institute) produced a vibrant display of molecules, cells and pathogens made from food and craft materials. Their idea was to immerse the low vision and blind community in the immune system by allowing them to touch large models complete with the finer molecular details. SensiLab (Monash University) challenged people to navigate their way with tactile maps, and people soon realised that the visual representations that we are used to may work well on map (e.g. a knife and fork representing dining areas), but aren’t necessarily the best guide by touch. 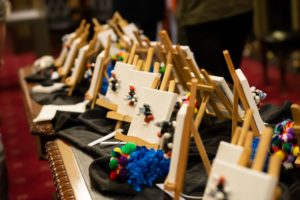 There were also delectable tasting sensations on offer. Emma Donnelly (Culinary Science) and Jon Seltin (Brick Lane Brewery) held workshops on the science of champagne and beer – on how sparkling wine gets its bubbles, the best glassware to drink out of, and the aromatic compounds that are added to beer. Participants were also tricked by food scientist, Tara Storey, into believing that some chocolate was sweeter than others based on the type of music they listened to while tasting. They also struggled to tell the difference between coffee and tea with eyes shut and nostrils clamped. Deakin University’s Centre for Advanced Sensory Science also challenged participants to taste the fat in food, and opened their eyes to the art of sensory marketing and how our taste buds can be influenced by other senses. 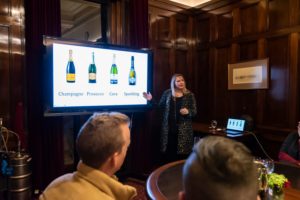 Emma Donnelly presenting a workshop on the science of sparkling wine. 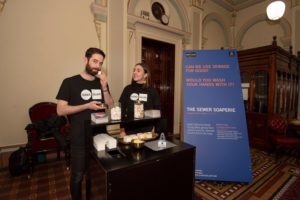 The sounds of delightful music could be heard in Queen’s Hall. Inspired by science, Elissa Goodrich, Adam Simmons and Gideon Brazil performed Gene Tree Project – music of the evolution of species. Vicki Hallett improvised riffs with her clarinets over the top of the sounds of nature (e.g. branches swaying) in Elephant Trail. The last moments of the Mars Rover were captured in beautiful, haunting melodies on the piano by Sam Colcheedas.

Imagine being able to hear a recording of that music as though it were live. Dr David Sly is designing the next generation of hearables, which includes headphones that provide 3D audio (the sound moves in relation to your head) that he set up for people to use. Sound and visual cues were mixed by Arup to produce a sound lab experience that messed with the mind; By playing monosyllabic sounds and watching people’s lips, your brain can be tricked into hearing what it is lip-reading (e.g. mistaking ‘fa’ for ‘ba’). People also walked through sound in Frank Feltham’s Sonic Efforts (RMIT). Walking is something we don’t concentrate on doing, but he devised a system that makes you aware of your balance and how you lift and land your feet when moving by listening to sound.

In the Parliament Chambers, guests speakers presented on a plethora topics. Susie Sheldrick from Silverpond spoke on the use of artificial intelligence (AI) to enhance our senses: Computer vision has allowed us to interpret images rapidly (e.g. cameras that can diagnose medical conditions), provide a sense of touch to prosthetics, and E-noses that recognise chemicals. 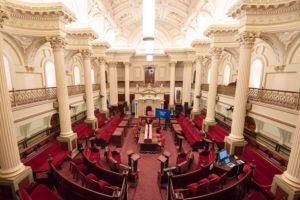 Kevin Orrman-Rossiter prepares to host a series of talks in the Legislative Council Chambers as MC.

NASA geobiologist, Dr Darlene Lim is working in simulated space missions on Earth to determine how astronauts will best conduct science and interact with an environment they’ll never be able to experience with their own senses – it’s unfeasible to ever touch rocks on the Moon or Mars with our bare hands. Dr Kate Selway’s expeditions, on the other hand, are in “a world that is totally white and featureless”. She spoke of her travels at the ends of the Earth, where senses can become useless as she studies the ice sheets in the arctic and Antarctic.

Dr Luke Smillie spoke about our selective attention. When we focus on one thing, we can miss something else. Magician Nicholas Johnson certainly made the most of the audience’s selective attention with his sleight of hand and deceptions. Yet at other times, as Dr Simon Cropper pointed out, we can be a slave to the senses. Some people receive more information than others, leading to hallucinations and synaesthesia. Dr David Farmer was certainly concerned about an information overload when he introduced himself for his Intrasensory science comedy – sometimes too much information can be overwhelming. 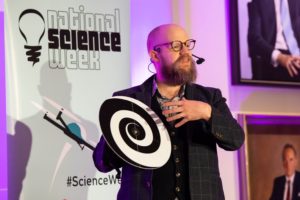 Nicholas Johnson performed magic and deception as he tricked the senses of audience members.

“There is no objective truth when it comes to vision,” Dr Maddy Yewers says. Humans have three photoreceptors to perceive colour, while dogs have only two and cannot see red. Other animals, such as bees, manta shrimp and the tawny dragon lizard, can have more and see colours in ultraviolet light too, which are invisible to us. Dr Enrich Fitzgerald studies whale senses: blue whales produce low frequency sounds in the infrasonic spectrum, which allows them to detect coastlines but not small objects, while other whales have high frequency sound for the echolocation of small objects (like their food).

Professor Arum Ram listens to classical music and associates it with mathematics. Musicians and mathematicians share similar emotions and precision, and so he spoke of the empathy of maths and music. He sees and hears the similar paths that Einstein and Holst took create their masterpieces in their work. Dr David Sly is more interested in how we hear music and is developing the next generation of hearable technology. Not only is he looking to improve sound quality with 3D audio, but smart assistance and sensors can be added to devices to provide stigma-free hearing aids, brain monitoring to detect seizures, and more. 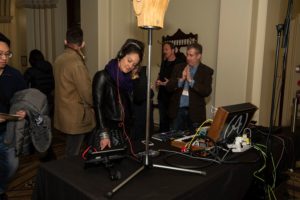 We feel, see, hear, smell, and taste the world, and we use balance, proprioception and other senses to centre ourselves in it. Extrasenory was an exploration of our experiences – to challenge ourselves, learn which senses influence others, and take our senses to new heights with advanced technology. The way we experience the world is changing, and now and then, it might just trick you.