Gym memberships may be commonplace, but have you ever considered a lab membership? In the heart of Brunswick, in a large shipping container, is a state-of-the-art life sciences laboratory. It is a community lab – built by and built for the community. Within it are resources to imagine, tinker and explore, whether you are an independent scholar in the life sciences, an entrepreneur, or someone with interest in biology.

BioQuisitive breaks down barriers for the curious and inquisitive. Biotechnology tools are largely only available to those in universities, research institutes, or industry corporations, but here they can be accessed by anyone. The lab also supports a more hands-on education and provides members the opportunity to investigate any question, investigate the ways in which science impacts their lives, or satisfy curiosity.

The term “DIY” is widely used in arts, crafts, and building – but why not in building things on a microscopic scale? The term “biohacking” is loosely defined as experiments that take place outside of a traditional lab. Biohackers use a DIY approach to transform the way molecular biology is studied. 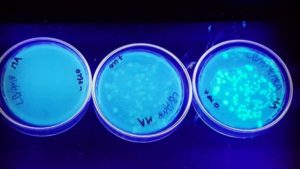 Lab members introduce the gene encoding a “green fluorescent protein” into E.coli bacteria to make them glow under UV light.

Members of the biohacking space in Melbourne banded together to create an inclusive lab space for people to set up their own DIY biology projects. Funded by a number of sausage sizzles and filled with donated equipment from universities and research organisations, Co-founder and Director, Andrew Gray is pleased to see how much it has grown. The laboratory meets the PC1 (Physical Containment Level 1) requirements outlined by the Australian Office of the Gene Technology Regulator to allow members to create and play with genetically modified organisms (GMOs) safely (for them and the environment). PC1 labs are only suitable for work with plants, invertebrates and non-infectious micro-organisms – but that still leaves a lot open.

In the early months of the COVID-19 pandemic, BioQuisitive worked with BioFoundry, a community lab in Sydney, to investigate novel diagnostic tests to identify SARS-CoV-2 infection. Testing methods rely on the detection of viral genetic material, which can be isolated and converted into DNA (reverse transcription) for a DNA amplification technique that quantifies the amount of DNA present through cycles of reactions at different temperatures (real-time PCR). These cycles take time the machine (and samples) have to be heated or cooled as necessary. To speed up the process, members of these community labs are testing loop-mediated isothermal amplification (LAMP), which reverse transcribes DNA and quantifies it in one step – and at one temperature. The team hopes to apply this technique to cheaper, fasters diagnosis for COVID-19 and other diseases.

BioQuisitive members work on a number of citizen science DNA sequencing projects. In collaboration with Science For All, members of the public have collectively developed methods of sequencing DNA from cells shed from the endangered Leadbeater Possum to monitor populations in the wild (more on this story here).  Bioinquisitive is also contributing to the MetaSUB project, which seeks to build a profile of microbes that exist in communal spaces in cities around the globe. By sequencing the DNA of bacteria found on public transport, the project aims to map the “Urban Biome”.

Building on the research of Professor Shosuke Yoshida, BioQuisitive teamed up with Science Gallery Melbourne to ask people around Australia to hunt for a new bacterial species: the “plastic-eaters”. By screening microbial communities exposed to poly(ethylene terephthalate) (PET), which is used extensively in plastic products, Yoshida isolated a novel bacterium that breaks down PET, Ideonella sakaiensis. This bacterium uses PET as its major energy source and has two enzymes that break PET down. Young people were invited to sample the bacteria in their environment and use DNA sequencing to determine whether this bacterium was in their midst. In addition, a member of the community lab is engineering a more enzymatically active version of rubber oxygenase A, an enzyme that degrades polyisoprene, the major constituent of natural rubber. Another student is investigating fungi with similar enzymes, and through a scanning electron microscope, the fungi appear to be physically dismantling bits of rubber.

Found everywhere in the environment, from mountaintops to deep sea trenches and from the tropics to Antarctica, Tardigrades are indestructible. More commonly known as “water bears”, these micro-animals are among the most resilient animals known and are able to survive in extreme conditions – even the vacuum of space. A BioQuisitive member is curious about what makes them able to withstand so many situations that would kill most other life forms. It is partly due to their capability to suspend their metabolism, reduce their water content, and the crystallisation of their proteins to protect themselves. They are fascinating creatures that are accessible to students and amateur scientists as they are easy to view – and look like tiny caterpillars under the ‘scope.

Andrew Gray’s idea in establishing a community lab was to ‘make science, in every essence, more accessible’. By problem-solving and investigating questions in the science around them with biotechnology, members of the community are ‘destroying the fear of the unknown’ as they probe into life on the smallest scale. 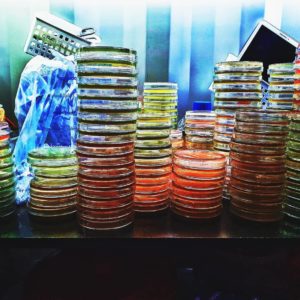