50 years ago, we saw our fragile Earth. On the 24th December, 1968, the astronauts of the Apollo 8 Mission looked out the window of their spacecraft to see the Earth across the surface of the moon. Astronaut William Anders quickly took a photograph that has since been declared as “the most influential environmental photograph ever taken” by Galen Rowell, Nature photographer. “We had always pondered the moonscape” and celebrated its place in the Universe, but have we thought about the fact that the moon stares back at us? Alicia Sometimes, broadcaster and writer, saw this image and realised how fragile the Earth is. To celebrate the influence of this significant picture, the Royal Society of Victoria held a panel to reflect on Earthrise and the progress we have made in the 50 years since. Alicia opened the evening with a few words from Carl Sagan’s book, Pale Blue Dot (1994), on seeing the Earth from afar – “on it everyone you love, everyone you know, everyone you ever heard of, every human being who ever was”. 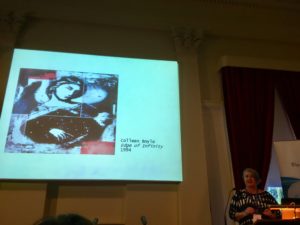 Dr Boyle has always been more inspired by the astronomy section of the library rather than the art section.

Dr Colleen Boyle, artist and art historian with RMIT’s School of Design celebrates this change in perspective – the fact that we can see ourselves from such a distance. In Dr Boyle’s view, pictures don’t emerge out of someone’s consciousness but are rather waiting to be seen when we finally perceive them. “We’ve looked at things from afar for a very long time”: from Jacopo de’ Barbari’s woodcut, ‘View of Venice’, imagining a bird’s eye perspective in 1500, to Nadar’s photograph of the French village, ‘Petit-Becetre’, taken from a hot air balloon in 1858, to the first glimpses of the Earth from space we had from the V-2 rocket that launched in 1947, we’ve felt compelled to look down on our home. Dr Boyle drew attention to the fact that the photographer of Earthrise, astronaut Anders referred to the Earth rising about the moonscape as “that picture over there” – it was a picture of our planet to be seen by us, and only became an image when we witnessed it.

Professor Rachel Webster, Head of Astrophysics at the University of Melbourne’s School of Physics, has witnessed multiple astronomical phenomena in the boundless Universe, and each brings different words to mind. The Hubble Ultra-Deep Field image of ten thousand galaxies showed her the vastness of space, and the first image of the Milky Way, which holds 100,000,000,000 stars showed our insignificance as individuals on a planet circling around only one, (relatively) small star. Yet the Earth is unique to us because it’s our home. We can also see its blue and green colours from afar, because it contains elements that are distinct from other planets in our Solar System. All planets started with hydrogen and helium, the simplest, smallest elements of the periodic table, but here on Earth we have discovered over 100 elements, each producing a unique spectrum of light. With a relatively thin atmosphere and distinctive colours, the distant image of our tiny world is truly remarkable. For Professor Webster, like Alicia, the juxtaposition of life so far away with the barrenness of the moonscape in the foreground of Earthrise evoked feelings of solitude and fragility. 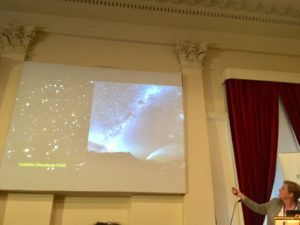 Images of the Universe show Professor Webster how vast it is and how small we are in it.

Seeing our planet so delicate and vulnerable amongst nothingness was a call to action, “to come together to meet challenges on a global level.” Senior Climatologist with the Bureau of Meteorology, Dr Lynette Bettio studies long-term changes to our local and global climate. Small shifts away from the average in weather phenomena like rainfall or temperature also shift the range of extremes that we experience, leading to hotter temperatures and more frequent extreme weather events. It is similar to the height of a school class: if the students were all to stand on a phone book, the mean height would shift upwards, and the tallest student would be even taller than before. There is growing awareness of the climate change and people are becoming more aware of their impact on the environment, yet there are many challenges still to face and it will take a global effort to meet them. To Dr Bettio, powerful images such as Earthrise act as a wakeup call to inspire change. She hopes that our children’s children will still be able to take photos of nature – which can only be a reality if we work together.

Dr Jenny Gray, CEO of Zoos Victoria and the President of the World Association of Zoos and Aquariums, wants us to work together to save the other species on our fragile Earth. From the time that the Earthrise photograph was taken in 1968, the human population has grown, resulting in less space for animals. We took their land to build infrastructure, “[leaving] behind only mountains and swamps”. Loss of habitat is the number one threat to animal species, and with a “60% decline in the number of animal species” in the past 50 years, Dr Gray and Zoos Victoria have dedicated themselves to work towards “a future rich in wildlife”. Zoos have moved from having animals living on concrete to open range areas that are more comparable to their natural habitat, and young are reared by their parents and not petted as much by people. As opposed to numbers and figures, Dr Gray believes that appealing to people’s emotions is what engages them to save wildlife (e.g. the campaign to save orangutans by ceasing consumption of palm oil). Earthrise gave us a powerful message: that “there’s only one little round ball like this”, and the creatures on it with us are “pretty special too” so we have to look after them.

Fast forward 50 years and our media is saturated with images. It would therefore be difficult for a single image to have the same impact of Earthrise when it was first shared. The panellists described images that would stand out to them in the future: Dr Boyle believes that looking at ourselves through the lens from Mars may hold as much significance as it did from the moon, and similarly to seeing Earth across the barren landscape of the moon, Professor Webster would like to one day see a photograph of life elsewhere in the Universe – and with NASA’s hunt for Exoplanets (planets outside our Solar System), it is a possibility. With her current concern regarding our planet’s warming climate, Dr Bettio would like to see a graph that shows global temperature rise remaining below 1.5°C into the future. Lastly, Dr Gray hopes to see photos of currently critically endangered Australian animals in the wild – a sign that we haven’t lost them. One of the species close to her heart is the orange-bellied parrot, but with fewer than 50 individuals remaining in the wild, it is bordering the edge of extinction and photos of them are rare. Zoos Victoria is releasing captive-bred birds into the wild to sustain the wild population, and are also assisting their yearly migration between Tasmania and Victoria. With multiple messages to spread regarding the protection of our environment and planet, it can be hard to be heard through all of the noise, but images can sometimes be powerful enough to get through. In the past 50 years, we’ve grown so much as a species, and developed incredible technology, but neglected to protect our environment. As Dr Gray said, “if all the humans left the planet, the environment would do quite well, but if the insects were gone, it would collapse”. So think about that tiny, “pale, blue dot” surrounded by nothingness – it’s our home, and it’s the only home we’ve got.