Four schools in Victoria received a Cambridge University Press Grant to support their National Science Week events in 2019. The objectives of these grants were to encourage schools to showcase science and to inspire wide community participation in science, technology, engineering, and mathematics (STEM). The Victorian Coordinating Committee thanks all grant recipients for their Science Week enthusiasm, and Cambridge University Press for their generous assistance to ensure that more students gain valuable science knowledge through fun and engaging Science Week activities.

Located in the Macedon Ranges and surrounded by woodland, the Alice Miller School is home to two farm dams that are teeming with different forms of life. Prior to National Science Week, biology students at the school began to survey local frog populations around these dams and realised that soil erosion was affecting these populations. Especially with so little vegetation remaining at the immediate perimeter of the water, the dam was falling prey to damaging erosion. To ensure that the dams continue to play home to a wide variety of organisms, sections of the dams required revegetation to prevent erosion of the banks.

The students mapped sites around the dams to be revegetated for maximum soil and species protection. Following consultation with their local council, the school used their Cambridge University Press grant to buy native plants (e.g. shrubs) from local nurseries, which the students then planted during National Science Week. They spent a day planting over one-third of their planned site and are continuing to plant in the remaining area over the course of the year.

Still closely monitoring local fauna, the students also set up tiles around the dams which they are using to keep track of populations. As they continue to plant species that are indigenous to the area, we hope that they see a bounce back of once struggling native animal populations due to their efforts. 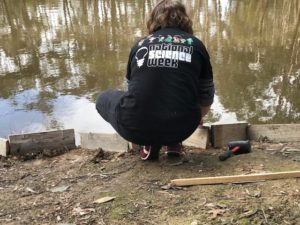 Collingwood College held a Family Science Night, which aimed to include the wider community in science. The students invited their family members to come along to the school to help explore the maths and science of space travel. They also designed parachutes to save dropping water bombs from exploding and rockets to fly into space. Everyone worked together to not only design and build their rocket models, but also planned their rocket trajectories to explore space. To include as many people as possible, the event catered for a range of nearly thirty different language and cultural backgrounds. It was a night of hands-on learning for everyone! In the light of the significant under-representation of women across the STEM disciplines, Mentone Girls’ Grammar School held their annual Women in Science Breakfast event during National Science Week. Participation in key Year 12 STEM subjects shows a clear gender imbalance in Australia: three males undertake physics to every female, and nearly two males study advanced mathematics to every female, while this ratio is flipped for biology. This gender imbalance in secondary school leads to an even greater disparity at university and in the workforce, with only 16% of university and VET STEM graduates being female.

One of the barriers for young women studying STEM-related subjects is low visibility of role models, and Mentone Girl’s Grammar aims to break down these barriers. The school invited their students to join young females from Victorian girls’ schools and hear from a number of champions in STEM. At the event, the students discussed their potential study pathways and career opportunities with female mentors. They also heard from Dr Gail Iles, physics lecturer and former astronaut trainer. Iles is an inspirational role model, especially for girls looking to pursue physics, astronomy, or to become an astronaut. Overall, the event focused on inspiring our next generation of young women to become scientists, engineers, mathematicians, doctors, etc. and achieve anything they set their hearts to. 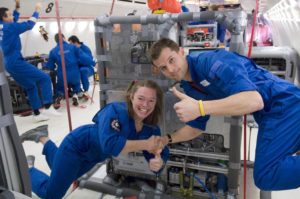 The Year 10 students prepared and facilitated workshops and activities to teach complex STEM concepts to the primary school students around theme Destination Moon to celebrate the 50th anniversary of the Moon Landing. Together, the students explored how light travels through space, and the concepts of force and motion on the Moon.

The school also designed a foyer display to celebrate all things Moon and Space. The display was complete with short video clips being shown on the TV featuring the 50th Anniversary of the Apollo 11 Mission when Neil Armstrong took his first steps on the Moon. 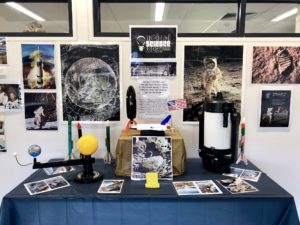