What is next for the human race? Humans are creative thinkers, problem solvers, and ambitious dreamers. Together we have achieved the seemingly impossible or what was merely science fiction, from curing diseases with nanoparticles, to creating energy from sunshine, wind and hydrogen, and flying in the sky. What does the future hold? How will science make the impossible become possible?

This article follows the Possible Impossibles Forum, held in conjunction with Parliament of Victoria for National Science Week. Four scientists working at the forefront of environmental science, technology, medical science and space exploration reflected on the way science can solve global challenges and improve people’s lives. The following summary is based on discussion between the panellists guided by questions from ABC Science’s Natasha Mitchell and the audience. 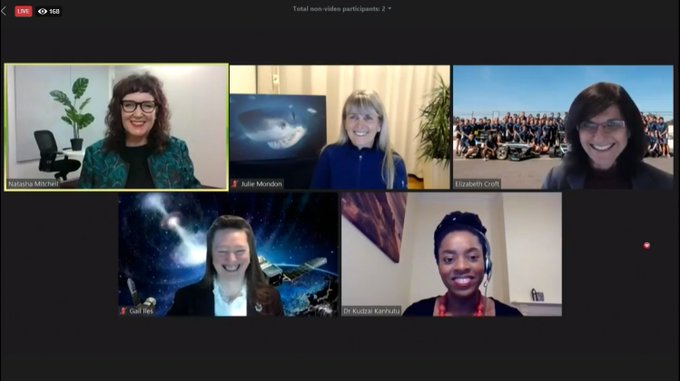 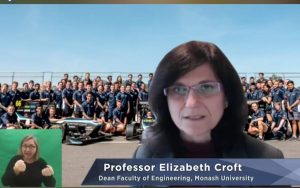 Professor Elizabeth Croft, Dean of Engineering at Monash University, wants to get Victorians back to work following the COVID-19 pandemic. Her work is in advancing industrial robotics and human-robot interactions. By collaborating with robots and working side-by-side, we can be free of repetitive and potentially dangerous labour as we use robots and computers to make our jobs more efficient. The pandemic revealed gaps in our manufacturing supply chains, and by incorporating robotic systems into manufacturing, we will able to produce things more efficiently to meet demand and be self-sufficient without relying on imports.

If we work alongside robots, Elizabeth does not believe that they will replace human employment. She argues that we once held the same concerns of computers, when in fact, the adoption of computers into the workforce drove a need for a new skillset and job types. After studying both arts and sciences formally herself, she encourages the next generation of future scientists and leaders to get as much education as they can. Your education is something that no one can take away and no robot can replace. 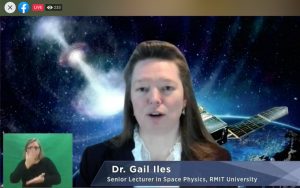 Dr Gail Iles is helping humans get to infinity and beyond. One of the great limitations of space travel (and the reason we cannot yet travel to Mars) is the high levels of radiation that astronauts are exposed to. If astronauts spend too long in space, the radiation causes DNA damage, leading to cancer and other illnesses. As a Senior Lecturer and Researcher in Space Physics at RMIT University, Gail aims to protect astronauts against radiation, thereby enabling further space exploration. This work will also protect people on Earth who are exposed to high levels of radiation, such as medical professionals who give radiotherapy or take X-rays, and those who live around Fukushima, Pripyat (Chernobyl) and other radioactive places.

The space industry also provides satellite data, which gives information looking both outwards to the Universe and inwards. We obtain location information that is useful in navigation and vehicles, such as tractors or autonomous cars, can be remotely operated by satellite. The data also provides weather information for forecasts and advanced warning of extreme weather phenomena and fire danger. It also is used to forecast “space weather”: fluctuations in electromagnetic radiation (e.g. UV radiation that causes skin damage or particles that interfere with radio signals, which is particularly important for emergency responders). ‘Space research is not just for up there, but also here,’ says Gail. 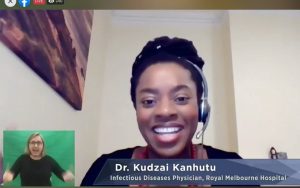 Dr Kudzai Kanhutu is an infectious diseases physician and deputy chief medical information officer at the Royal Melbourne Hospital. She focuses on improving patient care and adopting digital technologies to address health inequity. She wants to see the same care that is in hospitals being rolled out in homes, nursing homes, and for the homeless. Introducing robotics into healthcare in partnership with humans will help this. Robots could help with the delivery of supplies to people in quarantine, cleaning contaminated facilities, physical labour of moving patients, constant monitoring of patients, and perform calculations to dispense medication accurate dosages. Kudzai wants to see robots be meaningfully applied to healthcare while ‘preserving the beauty of human-human interactions,’ which is where Elizabeth’s research comes in, thus highlighting the importance of interdisciplinary teams. 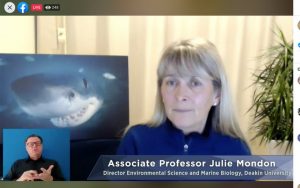 Associate Professor Julie Mondon, Director for Environmental Sciences (Marine Biology) at Deakin University, is concerned about the impact of pollution on the environment. At least 8 million tons of plastic end up in our oceans every year, and Julie wants to minimise the impact this has on marine life. We talk about “reduce, reuse, recycle”, but she believes that we need to add “reimagine and rethink” for a plastic-free future.

It costs very little to produce plastics, but they have a huge environmental cost once made. Humans and marine life are constantly ingesting microplastics as they have become ubiquitous in the environment and researchers are still trying to understand the ecological and health impacts of this. While much damage has already been done, Julie urges us to rethink our production of plastics and perhaps turn to bacterial- or algae-based materials instead to minimise the damage.

In these challenging times, science needs to inform policy and action. There has been a shift in the way we do things that affect our planet. Elizabeth says that it is partly because ‘young people choose to do things differently’.

Natasha challenged the four speakers to be lobbyists. Ethics around the progression of science (i.e. use of artificial intelligence, robots, gene editing, stem cells, etc.) have to be tackled by politicians in partnership with researchers. Science also needs to be respected so that policies can be implemented that protect our planet.

Watch the video of the live stream: