This article follows the Brewing Futures workshop hosted by the Royal Society of Victoria and Brick Lane Brewing Co. as part of the National Science Week “Possible Impossibles” activities.

‘Brewing is a kind of alchemy – transforming raw materials with the help of billions of minute organisms (yeast) into this ancient and universal drink’- Jon Seltin, Brick Lane Brewing Community.

Beer is the third most widely consumed drink globally after water and tea. The craft of brewing is rooted in science, technology and engineering. It has driven innovation and invention, and beer production was one of the first human endeavours to be industrialised. Things that once seemed like magic (e.g. refrigeration) have become possible thanks to the efforts of scientists and brewers – and often, they were one and the same.

During National Science Week, we spent an evening with Jon Seltin, Head Brewer at Brick Lane Brewing Co. Jon delved into the past, present, and future of beer, and explained how it has helped us achieve the once impossible. 40 tasting kits were sent across metro and regional areas in Victoria for participants to have for the evening.

How do we taste beer? We taste beer differently. Studies of taste sensitivity began in 1931, when chemist Arthur Fox accidentally blew a chemical powder called phenylthiocarbamine (PTC) into the air. Fox’s colleague cringed at the disgusting bitter taste when he got a mouthful while Fox did not taste anything. Around 30% of the population cannot taste PTC – they are “non-tasters”. Taste sensitivity comes down to a single gene that determines the number of fungiform papillae on your tongue, the lumps that hold taste buds. So-called “supertasters” have the most and are more sensitive to flavours – but this can make spicy foods too hot or hops-heavy beer off-putting. Jon offered participants strips of paper laced with PTC: some couldn’t taste it, some remarked that it was bitter, and a few were repulsed by the overwhelming bitterness.

‘Adversity to bitterness is something deeply primordial in our evolutionary history – yet why do we like bitter beer?’  – Jon.

It is not only humans who shy away from bitter foods – even protozoans (single-celled organisms) do. Yet we learn to like the taste of beer. In Jon’s experience, most people dislike beer the first time they try it, particularly bitter beers such as the Brick Lane Supernova. But that rejection turns into intrigue, then becomes habitual and potentially an obsession.

Not only is bitterness tolerated, it becomes sought out. The Brick Lane brewery mixes spent hops and grain from their brewing process to produce cow feed as a way of reducing waste. They give it to a farmer whose cows initially refused to eat it, but by the third delivery, the “hop-head cows” were scrambling to get to the hops feed. 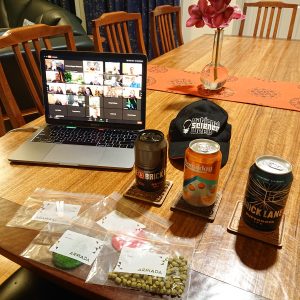 Participants enjoyed their beers while chatting to Jon Seltin at Brick Lane Brewing Co. via Zoom.

The bitterness of beer stems from hops, balancing the sweetness of malt. Hops flowers contain bitter acids as well as other components that impart character to beer. While the breeding of hops originally focused on bitterness, the plants have since been diversified, creating a wider variety of aromas and flavours. Linalool (floral) and geraniol (citrus) are two oils found in hops as well as lavender, basil, geraniums, and other plants, providing aroma and flavour. Flowers are added throughout the brewing process: bitter hops are added in hot phase as heat makes the bitter acids more soluble, and aroma hops are typically added later so that the oils do not evaporate. Workshop participants received galaxy hops pellets, “the saviour of the Australian hop industry”, and by rubbing them in their hands, the warmth released a tropical aroma. They also received cotton pads soaked in linalool and geraniol, to give their living rooms woody, grassy, floral, or citrus fragrances.

Malted barley (malt) provides the sugar source for yeast to ferment into alcohol. The starch in barley is not readily fermented and so it is first malted. The grain is soaked, encouraging the seed to germinate and release enzymes that break the starch into sugars. Once the seed starts to sprout, germination is halted by roasting – the hotter the roast, the darker the beer.

The Revolver Dark Hoppy Ale has a “roasty” character with the addition of multiple malt types. It is rich, but less intoxicating than a lighter larger. Roasting can have the effect of “locking up” some of the starch such that it cannot be fermented. With less food for the yeast to turn into alcohol, these beers can be lower in alcohol and the unfermented material lingers, giving a richer, thicker texture.

Barley crop, and hops vines to a lesser extent, are rapidly having to adapt to the changing climate. Both crops rely on regular rainfall. The stress response of barley to drought results in less, lower quality product. Hops are also sensitive to temperature and day length, making it difficult to achieve consistent results with climate variation, particularly for dry hop beers and craft beers, such as Revolver and Supernova. Jon is concerned that the expanded selection of hops varieties will shrink again due to climate change, but selective breeding is now being implemented to make barley and hops more drought and disease resistant.

Breeding used to be done as trial and error, cross-pollinating plants and taking years to whittle down crops with desired traits. In the 70’s, breeders in New Zealand treated the mother plant with a chemical that spilt its chromosomes into four sets (like us, hops usually have two sets), crossed it with a male and the resulting plants have three. This made targeted breeding easier and had the added bonus of extra DNA being crammed into each cell, making the plants bigger, more productive, and seedless (sterile). Advances in genetic engineering have aided in studying specific genes that encode desired traits. Genome editing has been used to add genes from basil and mint to brewer’s yeast such that they produce linalool and geraniol themselves without the need for hops.

An additional bonus of adding hops to a brew is that they have antibiotic properties. Hops kill bacteria such as Lactobacilius and Pediococcus, which are friendly bacteria that are found in the gut and dairy products but a brewer’s nightmare as they can ruin the taste of beer.  Yet the lactic acid produced by such bacteria is relied on to make sour beer. These beers are intentionally made acidic and tart by allowing wild yeast of bacteria, typically Lactobacilus and Pediococcus, to grow and produce lactic acid. Fruit can also contribute citric acid, adding further tartness. In the case of the Someday Blood Orange Sour Beer, the taste is very easy on the palate, bursting with the tart fruity flavour and little bitterness. 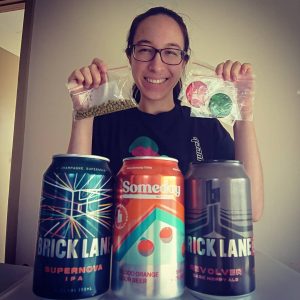 Catriona was excited to get stuck into the tasting kit!

“Beer has been at the forefront of scientific revolution for a long time,” says Jon. Many scientific advances and discoveries have come about as by-product of beer production: James Joule’s theory of conservation of energy, William Gosset’s student’s t-distribution for statistical analysis, and many more. Much science has gone into and come out of brewing, and beer may pave the way for technologies of the future.

Watch the live stream of the workshop: