Finalists for the Young Scientist Research Prizes and RSV Councillors. 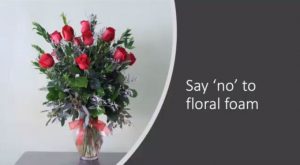 Floral arrangements make beautiful gifts but those that use foam bases come at a large environmental cost. Floral foam is composed of plastic that degrades into microplastics that are washed into rivers and oceans. Charlene studies the effect of these microplastics on marine invertebrates. The main component of these microplastics is phenol, which she found is absorbed across the skin of crustaceans such as daphnia. Phenol acted as an anaesthetic, taking away their ability to swim, and was lethal at higher concentrations. She also found that coastal and freshwater animals ingest the microplastics when in the water. Both the physical ingestion itself and the phenol chemical component reduced the level of protective antioxidants in their cells, therefore leaving the cells vulnerable to damage. Charlene urges florist to stop using foam that leaks toxic chemicals and breaks down to be eaten by marine animals. 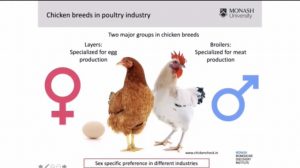 How do you tell the sex of an unhatched chick? The problem is that it is not yet possible. The egg industry relies on females and only requires a few roosters for reproduction. Around 6 million male hatchlings are culled shortly after birth per year, costing the industry $2.5 billion. Martin wanted to understand sex development, particularly the development of gonads (ovaries or testes) as the first step, at the genetic level. Genes in the sex chromosomes are active early in embryonic development to form gonads, which further lock-in sex by producing different hormones (i.e. oestrogen or testosterone). By tracking the location of different cell types during development and determining which genes are switched on or off at any given time, Martin has established a new model of development that is different to what we know of in mammals. With this work, he hopes to be able to determine sex before chicks fully develop and hatch, and potentially even manipulate the process so that most are female and no longer need to be culled. 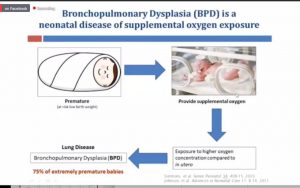 Around the world, 15 million babies are born prematurely every year and have trouble breathing at birth. They are provided oxygen supplementation, but in 75% of extremely premature babies, this leads to Bronchopulmonary Dysplasia (BPD), a severe lung disease. BPD causes deleterious effects in other organs and there is no adequate treatment. Symptoms in the lungs include inflammation, enlarged alveoli, and oxidative stress in cells (an imbalance between harmful and protective molecules), implicating the immune system in the disease pathology. Studies have shown elevated levels of G-CSF, a survival and growth factor for certain immune cell types, in lungs of preterm infants that develop BPD, but its role in the disease was unclear. By studying BPD in mice with and without G-CSF, Lakshanie was able to elucidate its contribution to disease. Without G-CSF, fewer immune cells migrated to the lungs and fewer were activated, meaning that there was less lung damage caused by inflammation. Lakshanie therefore proposes that blocking the effects of G-CSF may be an ideal therapy to prevent the early and long-term health consequences of BPD. 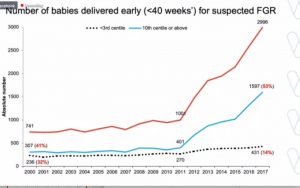 The stillbirth rate in Australia is 35% higher than the best-performing countries, lagging well behind other developed countries. Fetal growth restriction (FGR) is the leading cause of stillbirth, a condition in which a baby doesn’t grow to normal weight during pregnancy. In 2012, Victoria released a program to improve FGR detection and management, which successfully reduced the percentage of undetected severe FGR and stillbirth rate. But Roshan warns of the unintended consequences of this: unwarranted early delivery of normally grown babies, which is harmful for both their immediate perinatal and longer-term development. By driving hospitals to be better at detecting FGR, more babies that do not have FGR are being classified as having it. All medical diagnoses have to balance specificity (correctly identifying those without a disease) and sensitivity (correctly identifying those with a disease), and there may be trade-offs for one or the other. Roshan proposes a new way of monitoring FGR that balances these to ensure that no trade-off has to be made. 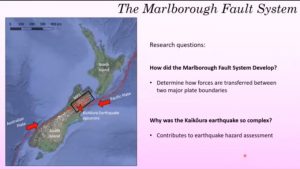 Devastating earthquakes are caused by sudden slips and breakages of underground rock. Just like our bones, when forces on the tectonic plates are too great, they snap and fracture, particularly along weaker points (faults). The 7.5 magnitude Kaikōura Earthquake on the South Island of New Zealand in 2016 is one of the most structurally complex earthquakes on record. It is not well understood but is likely to happen again. It was linked to the Marlborough Fault System, where the Pacific Plate and Australian Plate meet under South Island. Megan recreated the tectonic plate boundaries in a sandbox to model their interaction. This allowed her to determine how the fault developed and how forces are transferred between the two plate boundaries. The forces were distributed over a much large arear than anticipated, creating a series of fault lines in a similar orientation to the plate motion, forming sequentially southward – revealing how the Marlborough Fault system developed. There is a transfer of tectonic force southwards and a new fault is in development – something to watch out for in the area.

Hayden Dalton, School of Earth Sciences, The University of Melbourne 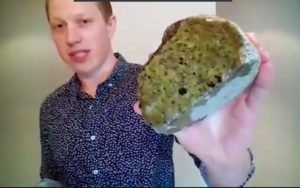 Kimberlites form volcanos unlike others as they are a source of gems – both literal and scientific. They form as carrot-shaped pipes below the Earth’s surface and are derived from the deepest magma. They therefore transport pieces of the deep mantle to the surface, including many minerals and diamonds. Hayden studies the chemical composition of two kimberlites in Finland: Kuusamo and Kaavi-Kuopio. He found that they have very distinct compositions and therefore mantle source regions (i.e. origins from the Earth’s interior). He then measured radioactive decay to date when the kimberlites formed. Radioactive decay is commonly used to date rocks, as the relative abundance of a naturally occurring radioactive isotope and its decay product (i.e. uranium to lead, potassium to argon, and rubidium to strontium) gives an indication of time. Hayden found that the formation of the Kuusamo and Kaavi-Kuopio Kimberlites occurred 750 and 600 million years ago respectively, linked to the breakup of an old supercontinent both times. 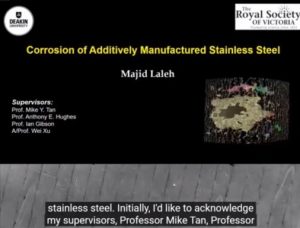 Additive manufacturing, the process of building layer by layer, is a transformative approach to industrial production, enabling the creation of lighter and stronger parts and systems. Products are built from “from the ground up” in contrast to conventional manufacturing processes that typically involve the removal of material (e.g. by milling or carving). One of the most common applications of additive manufacturing is 3D printing, in which metal, carbon fibres, or plastic is piped into complex geometric shapes. While additive manufacturing reduces production time and cost, the process has not yet been tested thoroughly for quality assurance. Majid compared additively manufactured to conventionally produced stainless steel and found that they had distinct features at the micro-scale. These imparted additively manufactured steel with greater resistance to different types of corrosion. Majid will continue to optimise the process of producing stainless steel by additive manufacturing to produce a quality material that is resistant to deformation. 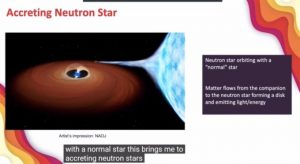 When a star dies, it begins a whole new life as a compact object so dense that is bends time and space. Adelle studies neutron stars that formed by the gravitational collapse of the remnant of a dying massive star. Neutron stars operate at the extremes of physics, and are so dense that they are the size of Melbourne but 1.5 times the mass of the Sun. Once formed, they do not actively generate heat nor emit much light, making them difficult to find in the giant cosmos. Adelle looks for them via their interaction with normal “companion” stars. In a process called accretion, neutron stars pull gas from a companion star, and the gas spirals towards the neutron star, emitting light and energy. The accretion of material onto a neutron star fuels unstable flashes (X-ray bursts) that are very brief but extremely bright. Adelle developed an understanding of the accretion process from beginning to end using both observational data and modelling. She also developed a software that predicts the parameters of neutron stars that we cannot observe (e.g. mass and radius) to learn more about these complex stars that are difficult to see.

Watch the video of the live stream: