Since moving to Melbourne, I’ve noticed a plethora of birds ranging from the small Rainbow Lorikeet to the big and occasionally aggressive Silver Gulls. I soon realized that these feathery creatures color Victoria with their presence and cheerful chirping. My neighborhood strolls,  accompanied by many loudly chirping birds, got me interested in identifying these calls. After further reading, I discovered that the metropolitan birds I’ve come across are not the only birds in Victoria. In regional Victoria, there are many others and unsurprisingly, some can be very hard to track down.

This is what prompted the ‘Communities Listening for Nature’ project. This project is a collaboration between the Victorian National Parks Association (VNPA) and scientists in Museums Victoria, with VNPA facilitating relationships between community members such as private and public landowners, and Museums Victoria leading the scientific analyses. It aims to make new acoustic monitoring technologies easily accessible to community members, and to utilize this technology to answer ecological questions.

A critical tool in this research is automated species recognition ‘recognizers’. Similar to human voice recognition tools like Siri, birds can recognize individual members of their species or other bird species. Dr Karen Rowe, an ecologist, specialist in bioacoustics at Museum Victoria, and one of the lead contributors on this project, developed a model for specific bird vocalizations by drawing on the unique characteristics of various bird calls. Using a spectrogram, plots of call frequency and intensity over time were mapped onto shades of gray. These grayscale plots represent different patterns which were then modelled using computer simulations, and used to recognize similar patterns in other data sets. However, this technique is easier to model in some bird species than others. For example, magpies have similar ‘harmonics’ – distinctive stacked patterns on a spectrogram – to humans. As a result, existing human algorithms could be used for magpie calls. Other species though require entirely new algorithms.  Ultimately, the biggest challenge in this field is building a database of high quality algorithms to recognize many different species. It requires not only large volumes of recordings but also knowledge in identifying bird calls. It seems impossible, but not to fear! This is only the beginning of these powerful recognizers.

Ultimately, Dr Rowe and her team want to build a library of similar bird calls in different contexts, to distinguish a magpie’s vocalization, for example, from another bird species’ vocalizations regardless of variation between individuals. This requires recording hundreds of calls,  but allows the recognizers to run through the recording library and recognize any bird calls found in the audio recording. The project so far has successfully characterized various Victorian bird calls, creating a snapshot of distinct bird ecosystems and soundscapes across Victoria. Among them is the Plains-wanderer, an Australian native. Dr Rowe developed a recognizer specific for these birds and through this technology identified Plains-wanderers’ calls in sites that had no previous sightings.

Due to the collaborative nature of this project. Dr Rowe and her team could train more people with this technology, allowing them to design their own acoustic monitoring projects. In fact, most of the community members involved knew a lot about specific bird calls making them an incredible resource in identifying vocalizations. As more people work together to collect data and share their knowledge, they will build the algorithm library of the future.

The ‘Communities Listening for Nature’ project was unique in its data acquisition methods. In Australia, the general public is not allowed to enter private property, making recording or collecting data in these areas impossible. The ‘Communities Listening to Nature’ project invited many private landowners into their study, allowing the scientists to collect recordings in these otherwise restricted areas. The result of this is a vast collection of many sounds, which aided in developing algorithms fort building the library. Presently, some of the recordings are available through Museums Victoria online. As collaboration with private property owners continues into the future, we will be able to collect more recordings to expand and build the library, not only for recognizing different bird calls but other animal calls as well. 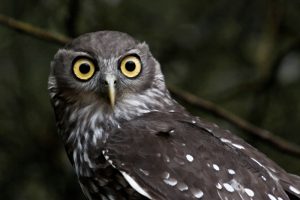 This monitoring has allowed researchers to better understand different bird species. Using this data, researchers can infer an animal’s behaviour when things change. A practical application of this improved knowledge is forecasting climate change. Dr Rowe says we know what to expect for the climate itself, but not how it will affect bird species. So, wide-scale and constant surveying of these birds to identify migratory or other changes would help provide the information we are currently lacking.

Documenting the presence of threatened species was another early goal of this project. A success story is the recognition of barking owls. Owls are known to be cryptic, nocturnal and transient animals, making them very difficult to track. However, they are also known to make distinct calls. Dr Rowe and her team were able to build recognizers for these species and record their presence. They now have verifiable records of a threatened species which could trigger a call to action for increased conservation efforts.

Dr Rowe’s main take away message from this project is how accessible the recognizers are as a tool for nature protection. Building a full library of bird calls is a daunting task, however with today’s technological advancements and increased active community engagement it is no longer impossible. As the world continues to change, these recordings will be valuable resources to remember the beauty of our natural world. The project’s success has prompted researchers to apply acoustic monitoring to trace and track mammals across Victoria.  Perhaps one day we will have an enormous and accessible sound library encompassing the entire Victorian biodiversity. By integrating more recognizers or developing more app programs, we would be able to increase direct community involvement and inspire people to fight for nature.

After learning more about acoustic monitoring I’ve grown to appreciate the beauty of the many chirping noises I usually take for granted. I’m still learning how to correctly identify magpies or crows based on their calls, but I’ve managed to master the Silver Gulls. So, when you take another stroll around your neighborhood, pay attention to how nature calls out. You too can experience nature’s hidden secrets!

Shania Prijaya is an MBiomed student at the University of Melbourne. This story was written as part of a Science Communication internship project with the Royal Society of Victoria under the mentorship of Dr Renee Beale.