Aboriginal and Torres Strait Islander people should be aware that this story contains names of deceased persons.

This article is written by Catriona Nguyen-Robertson, based on a presentation delivered by Associate Professor Duane Hamacher and Jessie Ferrari at The University of Melbourne.

The stars hold a significant place in the traditions of Aboriginal and Torres Strait Islander cultures across Australia. They are embedded into the orality – in story, song, dance, and material culture.

By weaving Indigenous knowledge, physics, and ecology together, Associate Professor Duane Hamacher, and BSc student and Yorta Yorta person, Jessie Ferrari, share how the animals, seasons and stars come together in Aboriginal Astronomy, with particular focus on the people of the Kulin Nation, the traditional owners of what is now Melbourne.

For thousands of years, the First Peoples of Australia have held intimate cultural relationships with the land, sea and sky. More stars are seen from the Southern Hemisphere as the south celestial pole is tilted towards the centre of the Milky Way and the Magellanic Clouds. The land was home to many nations and clan groups with diverse traditions, languages, and views of the stars.

While Western society relies on the written word, Indigenous knowledge is predominantly passed on through oral traditions and stories around the Dreaming. It was in these that people learned the law, learned how to take care of the land, and learned how to interact with one another and respect each other.

Duane has travelled around Australia and learned from Elders and Custodians of Knowledge in different regions. They taught him that properties of stars – their position at sunrise and sunset, twinkle, brightness, colour – can all tell you something. There are many links between the position of stars and animal behaviour. Duane and Jessie, a member of the Yorta Yorta people, have been piecing some of these together from what they learn from Elders and public archives about Indigenous Australians, which can be difficult to navigate, and rife with inconsistencies and mistakes, given the history of their mistreatment.

The people of the Kulin nation lived their lives according to their own of markings of the changing seasons. Seven Wurundjeri seasons are described in Woiwurrung traditions[1]: The Seven Seasons of the Kulin People, Museums Victoria

When the hot winds stop blowing and the temperatures cool, the manna gums flower, and the days and nights become equal in length, it is Iuk Season. In March, the Yarra River becomes muddier and the short-finned eels migrate downstream towards the sea. The eel is a vital part of their society as a sacred, spiritual protector, and an important (buttery – as described by Jessie) food source. The importance of the eel to local communities is evident by the extensive fish-trapping systems in Budj Bim created by the Gunditjmara people. Hundreds of meters of excavated channels and hundreds of tonnes worth of basalt dam walls have covered the site for thousands of years to manage water flow from Lake Condah. Eel and fish traps (i.e. small holding ponds), increased food availability (and trading currency) all year round for the Gunditjmara people. As the eels migrate, Canopus, Lo-an-tukka, the second brightest star in the sky is seen at its highest position at due South.

From April to June, when morning mists cover the land, nights become longer, and wombats emerge from their burrows it comes into Waring Season. Migrating birds arrive from Tasmania and male bulen-bulen, lyrebirds, begin to display their mounds, their spectacular tail feathers, and their songs to attract a mate. As the solstice approaches, Scorpius, at the heart of which is the reddish star Antares, Balayang (Djuit in Boorong naming), rises at sunset. ‘Two seasonal indicators become tied in together – our closest star [the Sun] and the distant stars [like Antares],’ says Duane.

Guling, Orchid Season (Aug), is marked by orchids flowering, the silver wattle bursting into colour and koalas (Gurrborra) bellowing at night. Jessie learned about the knowledge of Wurundjeri Elder, Nanna Jessie Hunter, who shared that her mother used the Rose Orchid as a medicinal plant in tea to relieve headaches when it bloomed at this time of year. This highlights the connection of the health of the people, animals, and land.

‘There are clear links between the heavens and what is happening with animals and plants on the earth,’ says Jessie. ‘They are all so interconnected. If one is out of whack, things aren’t right’. They note that the common brown butterfly, for example, has been hatching increasingly earlier every year for the past 65 years – an effect of climate change and warming temperatures.

Land and sky reflect each other. In the north-west of Victoria, Lake Tyrrell is named after the local Wergaia word for ‘sky’, as the salt lake mirrors the stars in the sky. The oral traditions of the Boorong people tell a story of how carpenter ant larvae were found to be a good food source in August when food was scarce: During a period of starvation and drought, Marpeankurrk kicked over a log in search of food and found the ant larvae. When Marpeankurrk, the star Arcturus, is visible, it is time to gather carpenter ant larvae.

Another seasonal indicator of the Boorong people is the star constellation Lyra, which they called Neilloan. Neilloan is in the sky when Malleefowl build their mounds, between March and October. The last sighting of Neilloan, the ancestral Mallefowl just after sunset in early October would mark the commencement of the egg-laying season.

Duane also shared knowledge of the Euahlayi people who live in north-western NSW, taught by Uncle Ghillar Michael Anderson. The Euahlayi call the celestial emu Gawargay, formed by the dark spaces between the stars in the Milky Way. In April and May, Gawargay appears to be running in the sky, coinciding with mating season, as females chase males to mate. This marks the time to gather emu eggs for food as they are not yet fertilised. In June and July, Gawargay lies horizontal across the sky at dusk, which is the male sitting on the nest.  In August and September the emu is perpendicular to the land, pointing towards the horizon as the male emu stands as the chicks hatch. At this time the cold weather is left behind. Late in the year the Gawargay sits low on the horizon at sunset, searching for water in the waterhole, signifying the lack of water in the hot, dry summer. 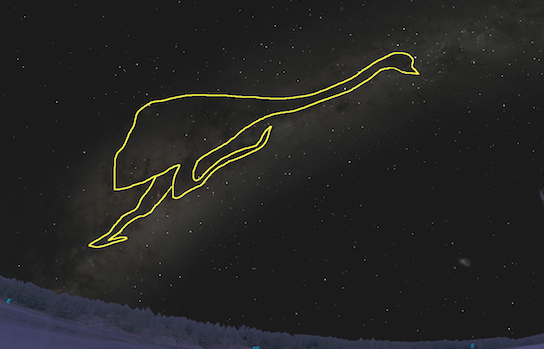 The Emu in the Sky, Australian Indigenous Astronomy Blog http://aboriginalastronomy.blogspot.com/2014/03/the-kamilaroi-and-euahlayi-emu-in-sky.html

Encoded in the positions and properties of stars are lessons on seasonal change, forecasting weather, the life cycle of an animals, and the time to gather food. When migration patterns and breeding seasons align with the stars as they should, Aboriginal and Torres Strait Islander peoples know that country is healthy.

[1] All italicised words are in the Woiwurrung language unless otherwise indicated.